Return trip....Ah, nothing turns out quite as you plan, eh?  Ivo had offered to drive me to Rome in the afternoon of Friday.  Due to a flat tire and other complications, we set off later, at 4:30.  It was raining and due to the infrequency of heavy rain in Rome, Ivo predicted blocked traffic on the GRA and throughout the center.

Well, it DID take 3 hours to arrive at my little secret pension, near the Piazza del Popolo.  However, we were able to navigate, without error, via the via Aurelia, past Vatican City, directly to via di Ripetta!!  Again, the streets glistened and were evening-peaceful.

Based upon a recommendation from Rome friends Suzanne and Don, I enjoyed a 7:30 reservation at GranSasso.  I was re-reading  Alan Epstein's "As the Romans Do", published in 2000, coincidently the section on trattorias and since I was dining alone, I carried it with me. 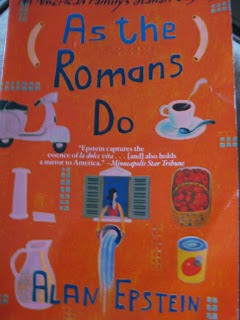 As I sipped my white wine and awaited my starter of smoked duck carpaccio, main course of alici fritte and contorni of spinach, I read, "Just give me a plate of....fettucine with tomatoes, basil and mozzarella at Gran Sasso on via di Ripetta near the Piazza del Popolo, where Mom cooks in her blue apron and slippers in full view of the diners, and her two sons deliver the food...."   !!!  I showed it to my server and he was, indeed, a son and he pointed to his brother sitting at a table near the wall, doing the books....  !!!  Dinner was wonderful and very affordable.

Then, the real or should I say surreal walk to the gate (stopping along the way for my last great cappuccino and cornetto), FCO at 4:20 a.m. 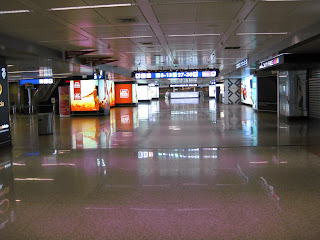 All travel was smooth, though passport control in AMS is still clogged, so stay calm and anticipate it.  If you have a short connection, there IS a display board for those flights whose passengers qualify for a separate "short connection" line.  It's mounted overhead but very close to the actual windows so watch for it and ask the AMS attendants who are facilitating the flow if your flight is on the list.  They are very helpful!!  Prepare yourself for frantic and sometimes pushy Americans, though, crashing about...

So, back in Seattle as it flows into late fall/early winter and preparation for the holidays.  Off Wednesday to meet up with Madelyn in SF for our Thanksgiving with the Moody clans!!